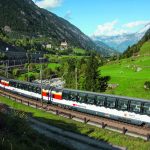 In operation less than a year, the Gotthard Panorama Express travels the former standard-gauge main line Gotthard Bahn connecting Zurich to Lugano and on to Milan. The new 35-mile Gotthard Base Tunnel, opened last December, allows through passenger and freight trains to bypass the curves and steep grades of the old route, but 35 miles under the Alps isn’t much of a scenic experience. Hence the Panorama Express.

The Line. The train’s itinerary is limited to the most scenic portion of the old line, between Fluelen in the north and Lugano in Ticino, the Italian part of Switzerland. From north to south, the line climbs up the side of a beautiful valley, on tracks that include spiral tunnels and a switchback: You pass a picturesque country church three times, at different levels. At the top, you go through the 9-mile Gotthard Tunnel, the first Alpine rail tunnel, once the world’s longest, and an outstanding engineering accomplishment in its time. Emerging from the tunnel, you descend along an equally beautiful valley, again with spiral tunnels that let you look out and see a portion of the track you will traverse several minutes later.

Schedules. The promotional focus is on an itinerary that combines the rail trip with a boat trip on Lake Lucerne between Lucerne and Fluelen, where the rail station is adjacent to the boat dock. The train makes one round-trip daily, leaving Lugano in the morning and Fluelen in mid-afternoon, both timings designed to give you time for lunch on the lake boat. You can also get to Fluelen by rail from Lucerne or Zurich if you don’t want the boat trip, but the boat trip is also highly scenic.

Prices. The current price for a Lucerne-Lugano boat-rail trip this fall is 92 Swiss francs (about $95) in second class, 150 francs in first class; seat reservations at 24 francs are required. Seating in both classes is comfortable, but only first class cars have panoramic windows. The Swiss actively promote the use of a Swiss Travel Pass, which includes the Gotthard Panorama Express with no surcharges other than the reservation fee. First class Eurailpass holders pay 34 francs, second class Eurail holders pay 23 francs or they can upgrade to first class Panorama cars for 81 francs. 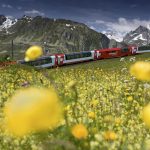 The Glacier Express between the Furka and the Oberalp, near Hospental in the Canton Uri. – (c) Switzerland Tourism – by swiss-image.ch/ Christof Sonderegger

“The world’s slowest express train” has been a flagship of the Swiss scenic train system since 1930. It runs three times daily in the summer, once daily in winter, plying the tracks of two cooperating narrow gauge lines that cross much of central Switzerland from east to west.

The Train. The Glacier Express carries panorama cars in both first and second class. First class seating is 2-1, second class is 2-2, and both provide adequate legroom.

Schedules. The through trip between St. Moritz and Zermatt, takes eight hours to cover the 181-mile trip: Yes that 22 miles per hour journey probably is the world’s slowest express. In the summer, May 13 to Oct. 22, three trains run daily in each direction, leaving between about 8 and 10 a.m., arriving eight hours later. In the winter, between Dec. 11 and May 12, one train operates daily; there are no trains between Oct. 22 and Dec. 11.

Prices. Mid-September prices for mid-October travel for the full St. Moritz-Zermatt route are 168 francs in second class, 302 francs in first class. Summer rates are not available at this writing; you can buy only three months in advance. The website at glacierexpress.ch/en allows you to buy tickets and select specific seats. Seat reservations are mandatory. 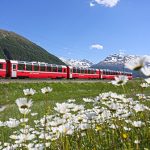 This extension of the Chur-St. Moritz route takes you into northern Italy.

The Line. The 2½ hour route from St. Moritz begins by climbing to the Bernina Pass, 7392 feet above sea level, before descending the walls of the Poschiavo valley to Tirano, at 1447 feet and just over the Italian border. You run through a series of tunnels, switchbacks and the often-pictured Brusio spiral viaduct. From the top, views of the valley below are spectacular. At Tirano, Bernina Express riders can choose between returning to St. Moritz, taking an express bus to Lugano (included in Swiss passes, reservations required), or taking an Italian train to Milan or Lugano; you can also do the entire trip in the reverse direction. Lots of travelers plan to arrive in Tirano in time for lunch at one of the handful of restaurants around the plaza where both Swiss and Italian rail stations are located. This line is also part of the UNESCO World Heritage site.

The Train. Bernina Express includes panorama cars with both first and second class. Cars are similar to those on the Glacier Express. The Bernina line is one of the word’s steepest adhesion railways—steel wheels on steel rails, no cogs—with grades in excess of 7 percent.

Schedules. Bernina Express runs twice daily between St. Moritz and Tirano between May 13 and Oct. 29. At least some additional trains operate all year, but much of the time they run only between Tirano and Pontresina, about five miles from St. Moritz with local connections.

I’ve driven through the Montreux-Zewisimmen area, including Gruyere, Chateau d’Oex and Gstaad, and found it to be beautiful.

The Centovalle narrow-gauge line links Locarno, near Lugano, with Domodossola over a two-hour scenic 32-mile trip that passes mountains, waterfalls, viaducts and ravines. Although much of it is in Italy, it’s included in the Swiss Travel Pass. For obvious reasons, most travelers refer to it by the Italian name rather than the acronym for the Swiss portion of the line, FART. It provides a link between two important trans-Alpine rail corridors: Milan-Geneva through the Simplon Tunnel and Milan-Zurich through the Gotthard tunnels.