Southern Pacific 4449 under steam in Tacoma, Wash. in June 2011 by Drew Jacksich from San Jose, Calif., via Wikimedia Commons
Tweet

People take extended one-time non-Amtrak rail excursions for one of two reasons, or maybe both:

My personal rail interests are centered on high-speed developments, airport access, transit and other routine useful applications. But a few weeks ago, I hooked up with some friends and took a genuine railfan excursion that featured both rare mileage and big steam.

Looking east up the Columbia River Gorge, from Crown Point in Oregon, USA By Hux (Own work) [Public domain], via Wikimedia Commons

The trip I took ran from Portland, Oregon, over the Amtrak Columbia Gorge route as far east as Wishram, near The Dalles, where it turned south onto the former Oregon Trunk line, very rare mileage, up the Deschutes River Gorge to Bend. We spend the night in Bend, and returned over the same routing the following day. My primary interest was in the rare mileage, and this trip did not disappoint:  There is no paved road through the Deschutes Gorge, and the scenery is fantastic.

Big steam fans also got their reward. Our train was pulled by the well-known Southern Pacific engine 4449, a streamlined 4-8-4 model that once hauled the crack Daylights and also hauled the Freedom Train excursions. I’m old enough to have traveled behind steam as a kid, and as far as trains are concerned, my attitude toward steam is “meh.” But that’s a minority opinion in railfandom: I’d guess that most tour participants were big steam buffs. 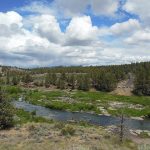 The Deschutes River from a bridge on Oregon Route 126 just north of Cline Falls State Scenic Viewpoint and a few miles west of Redmond, Deschutes County, Oregon by Jsayre64 (Own work), via Wikimedia Commons

The train carried more than a dozen vintage passenger cars, including six dome cars and a parlor car, along with several coaches. These were culled from among the groups and individuals who own vintage railcars and lease them out to excursions. It also included a baggage car with open side doors for folks who wanted to photograph the train and scenery without having to shoot through glass. Although the steam engine really hauled the train, it also pulled an Amtrak diesel along to provide electrical power for the cars and as a backup in case something happened to the steam. That sort of arrangement seems to be par for the course on many big steam excursions.

The experience was, at least my rail buff friends tell me, also par for the course. Among the high points:

But the trip also had some downside:

The trip was surprisingly expensive. The all-up rates for the train and overnight accommodations in Bend started out — in ordinary coaches — for around $600, per person double occupancy, ranging up to more than $1500, single occupancy, in one of the dome cars.